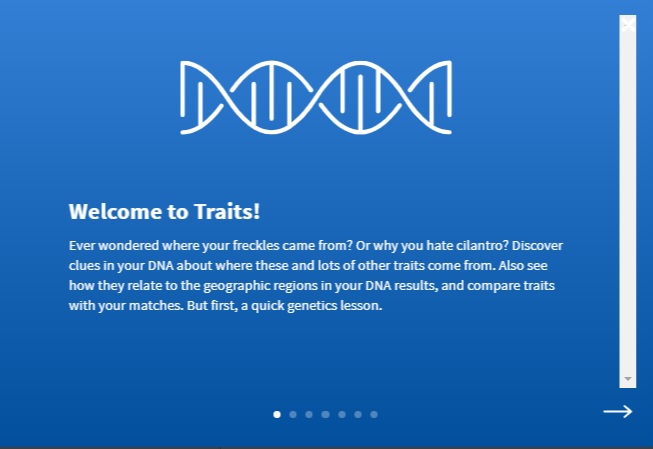 AncestryDNA has a new add-on called AncestryDNA Traits.  Traits costs $9.99 and is available to people who have already tested with AncestryDNA.

The sensory traits, “See how your genes influence things like whether you have a sweet tooth or dislike the taste of cilantro”:

Here is a view of the AncestryDNA Traits page:

There are additional features to compare your traits with other users, who have also paid for this service, and with people who descend from the same ancestral regions you do.

Looking at my results, some of the traits are correct and some aren’t.  For the eleven appearance traits that apply to me (not male hair loss), three are incorrect.  The incorrect ones include not having a cleft chin.  Some of the correct ones are pretty vague, like having darker hair.  Three of the sensory traits are probably correct, and I’m not sure about the fourth.  It takes a lot of clicks to navigate to all of the information, probably because there isn’t a lot of information there.

I thought it might be interesting to look at traits from the ancestral regions.  Unfortunately, some of the sensory traits don’t yet have enough information for some regions.  It is moderately interesting to see how many people from regions like Germanic Europe have different eye colors or unattached earlobes.

Overall the new AncestryDNA Traits is mildly interesting.  Hopefully as more features are revealed, it will become more worth the cost.

View all posts by Liane Jensen